The True Size of the North

On the right is the map of Westeros that we are all familiar with. Each time we open a book from the A Song of Ice and Fire Series we are greeted with this immediately recognizable continent. Over this land, conveniently shaped to fit on two consecutive pages, I have enjoyed following the adventures of some of my favorite characters in literature.

With the publication of The Lands of Ice and Fire, us fans have been offered a greater view into the world. As a geographer by training, I quickly snatched it up. Maps are a way that I (and many other readers I know) are able to deeply immerse ourselves in the worlds of fiction, fantasy or otherwise.

As anyone who has taken a cartography class knows, however, maps are never a true representation of the world. Not only can we not include every detail of the world on map, but due to the curvature of the Earth and the flatness of paper/computer screens, no map can accurately display the location of all features. Every map will have either size, distance, direction, and/or shape distorted at least a little bit. (For more information on how this works, check out this ugly but informative page by UC-Boulder.)

This lead me to wonder how the "real" world of A Song of Ice and Fire might be different than they are displayed in the books. This webpage consists of my attempts to explore this question.

I have made the following assumptions regarding the world of ASOIAF in my analysis. I have tried to justify them the best I can, but they are still somewhat arbitrary, and deviation from these assumptions will produce different results.

So lets start with the world as we know and love it, in a Mercator projection.

Note the straight lines of longitude and latitude. This is a characteristic of cylindrical projections like Mercator. We have defined this map's projection, and we know the continents' latitudes. We can can compare the size of this world with our own. The longitude selected here is arbitrary (in fact these two maps have different longitudes). But from an American perspective, the placement of Westerosi regions is very interesting. The North begins at almost the exact place as the Canadian border. Dorne, which is ethnically and climatically different from the rest of Westeros, sits near the Mexican desert. Kings Landing is at almost the exact same latitude as Washington D.C.

If we know that northern latitudes have exaggerated sizes in Mercator maps, than we should be able to assume that northern Westeros isn't really as big relative to Valyria and Sothoryos as it appears. Generally, mid to high latitude continents are displayed with conical projections. Most maps that show exclusively the US or Europe have this type of projection  This would also be the appropriate choice for displaying Westeros and Essos. The following is a map in an Albers Projection, which distorts shape but keeps area the true. 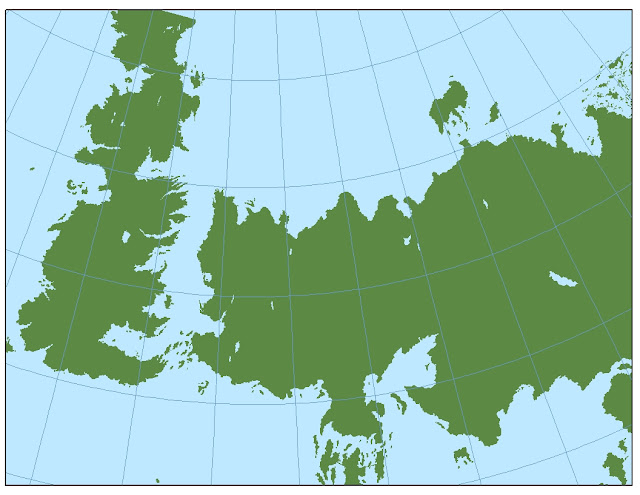 We can see that this is indeed the case. The North once seemed to be about the same size as the rest of the realm, and now it appears to be closer to a quarter of that size. (I have cut off the eastern part of Essos because this projection was only intended for use in North America. Far east becomes too distorted to be useful.)

And again, we can see how these changes between projections are analogous to the same on Earth. 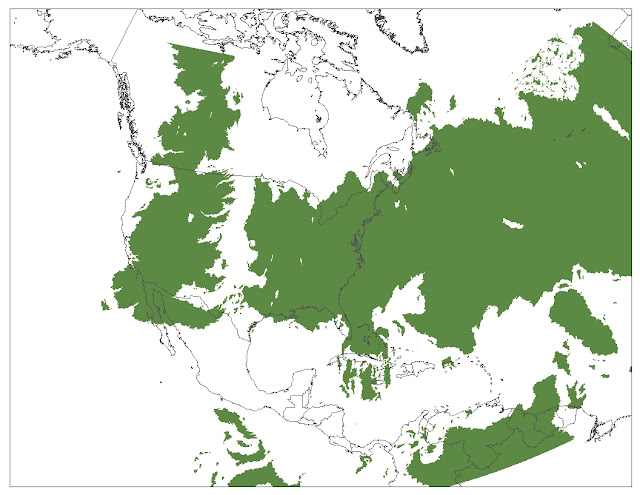 While "Up" on the page is no longer directly north, we get a better idea of how the size of land masses compare.

We can make the same comparison between different projections of Westeros exclusively: 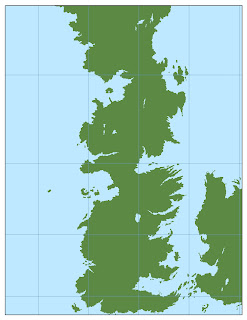 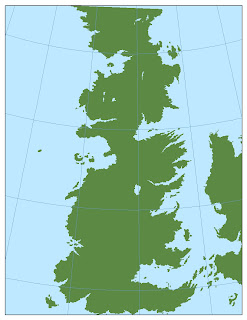 As you may have guessed, the map on the left is Westeros as we are used to it (in Mercator), and on the right is Westeros in a conical projection.

We now know how big Westeros is, and how its size compares relative to its world. However, we still have not seen a "true" representation of the series' lands. Albers Projection distorts the map like Mercator does, just in a different way. 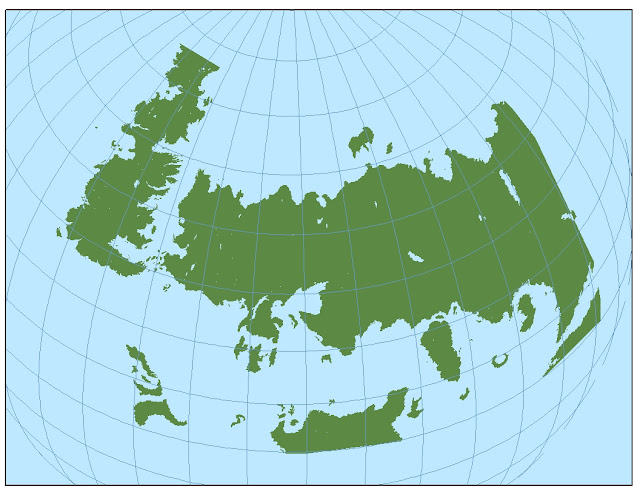 This gives us an even different look at world. We are able to imagine how the continents might wrap around the globe. Interestingly, if I am correct that the wall is at 60°N, then the cartographers of The Lands of Ice and Fire stopped drawing their map right at the equator.

Finally, if you are curious to see how these continents really look on a globe, below I have embedded this map draped over a Google Earth model. You can zoom and fly around to you heart's desire. Currently there is just the outline of the continents, but I would like to add more details in the future.